Chichen Itza or “Mouth of the Well Itzaes” is one of the most famous and controversial metropolis still standing in the Mayan world. Once a prominent cultural and political center of the old Maya civilization, it was one of the most extensive settlements during the end of the tenth century when the city was invaded by a predominantly warlike tribe, the Toltecs. This invasion infused the culture with a new series of elements, not least of which is the representation of the snake god Kukulcan. However, years later the city was abandoned for reasons which are still unknown.

During its golden age, Chichen Itza was the most powerful city in the Peninsula of Yucatan. Among its most remarkable buildings is the Temple of Warriors, the group of Thousands of Columns, the Platform of Venus, the Tzompantli, the Ball Court, the Snail or Observatory in the Church.

The spectacular Pyramid of Kukulcan in Chichen Itza is breathtaking as it towers above its visitors. It is a four-sided pyramid, 30 meters high and crowned with a temple. The Pyramid actually has two distinct structures, each correspond to a different era. The oldest is completely covered by the most recent. Inside lies the sculpture of a “Chac Mool” and a throne in the form of a red painted jaguar. It is believed that this pyramid represents the Mayan calendar: each step is one day of the year. There are 91 steps on each of the four sides, plus the one represented by the platform, a total of 365 days, the solar year to the day, giving rise to the belief that the monument was erected to honor the god of the sun.

The astronomical meaning of this building is obvious in Chichen Itza. It is here that the “Feathered Serpent” descends punctually every equinox, in a light and shadow phenomenon that attracts thousands of visitors annually from all over the globe.

The sacred cenote of Chichen Itza was the heart of religious activities not only for the city itself, but for the entire Mayan region. As part of their reverence to the god of water, the Maya threw in ceremonial offerings consisting mainly of precious objects. Stuffs of gold, jade, copper, cloth and basketwork have been retrieved from its murky depths. So great was the city’s power that for centuries after its declines it was occupied sporadically for religious ceremonies before being forgotten and left to be swallowed by the jungle.

And so the centuries passed until the arrival of the explorers, ancient relics promised. From among the trees and undergrowth, new discoveries continue to be made.

Chichen Itza is a marvelous, magical place to penetrate the intriguing, imposing an unforgettable world of the Maya, and to experience a firsthand view of this extraordinary culture.

Chichen Itza is one of the largest and richest monuments of Mexico’s archaeological sites. It became a World Heritage Site in 1988 and today stands proud to be named one of the Seven Wonders of the Modern World.

Later we take you to a beautiful open type cenote where you will have the opportunity to rappel, zip line, snorkel or just relax in a hammock after a delicious traditional meal from southeast Mexico.

No matter what level of experience you have in outdoor activities, you can do this fun challenge with the assistance of our guides that will accompany and advise you all the way, giving you a safe and memorable experience that will last for years to come.

Not included:
• Entrance to the archaeological site
• Beverages
• Tips

Note:
This tour operates with minimum 4 people, however contact us for availability. 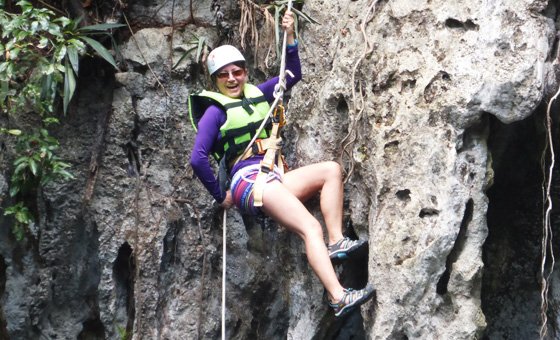